For two nights the Old Vic Tunnels in London will play host to an array of artistic talent featuring theatre, ﬁlm, visual arts and installation, spoken word, interactive performance, dance, music, circus and cabaret. Beneath the train tracks of Waterloo station on Friday, August 20th and Saturday, August 21st enter a space where you will be able to explore the atmospheric space ofthe tunnels, becoming part of the Dark Carnival world for a ﬂeeting moment, a few minutes or the whole night.

Dark Carnival: Notes from Underground is a unique experience where the cavernous arches of the creative space will be enlivened by known artists and the unknown quantity of what the audience will bring. The collaborative process will see artists whose projects are constructed in the liminal frameworks between aesthetics and utility, object and the operative, architecture and performance. A strong strand of the night will lie in physical theatre in seeking to use the full potential of the tunnels with an innovative night exploring the imagination, asking “What is independent of the momentary tastes of audiences?”.

Become part of the Dark Carnival world for a ﬂeeting moment, a few minutes or the whole night.

!(feature_r)http://relayer.s3.amazonaws.com/articles/spreads/4c96498dc1531723a000011f.jpg!The international artists taking visitors on the trip through the tunnels will include Italy’s Vaganti, founded in 2004 by Anna Dora Dorno and Nicola Pianzola. They have developed a method in which the physical and vocal actions of the performers interact with different artistic forms resulting in an organic unity of physical actions, songs, live music, poetry, visual art and new media. Brazilian-born Vincius Salles is a UK-based performer and choreographer who has being creating his own work since 2000 guided by the belief the body is a canvas to express his ideas, rejecting the passive submission expected of an audience and ideally suited to the ethos of the Dark Carnival. He’s already performed with Punchdrunk and his appearance at The Old Vic Tunnels is eagerly awaited. Claudio Santana, an exponent of physical theatre having trained and worked at the Grotowski Institute in Poland and Thomas Richards Work Centre in Pontedera, is making his directorial debut in London at Dark Carnival. He is currently working with Domenico Castaldo’s ensemble in Italy.

!(feature_l)http://relayer.s3.amazonaws.com/articles/spreads/4c96498dc1531723a0000120.jpg!Visual artist Bram Thomas Arnold regularly takes advantage of the methods of other disciplines for his own artistic endeavours and has recently been an English library in New York, a novel strewn over the skies of Brooklyn and a plank of wood in Bristol. Peter Capaldi, famed for his explosive outbursts in The Thick of It and In The Loop will appear in a short film, as will artists such as Rachel Wilberforce, a contemporary artist practising photography, film and video, sculptress Lyndsey Searle, artist Oona Grimes and the epic acoustic orchestral sounds of Orlando Seale and The Swell. If that’s not enough, the hilarious EastEnd Cabaret who will teach you all about sex and Communism with the help of Mr Little Red Book — what they call productive copulation!

For those who like to party late while satisfying their artistic appetite, The Old Vic Tunnels will host a party night in The Bunker Bar entitled “Red Light Night” on Saturday, August 21st from 9pm. Any ticket bought for Dark Carnival on Friday or Saturday give you automatic entry into Red Light Night. Tickets can also be bought on the door, or reserved online.

For a full list of artists and more information visit: www.dark-carnival.co.uk. 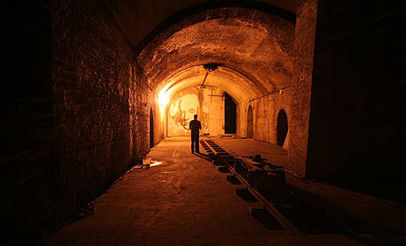